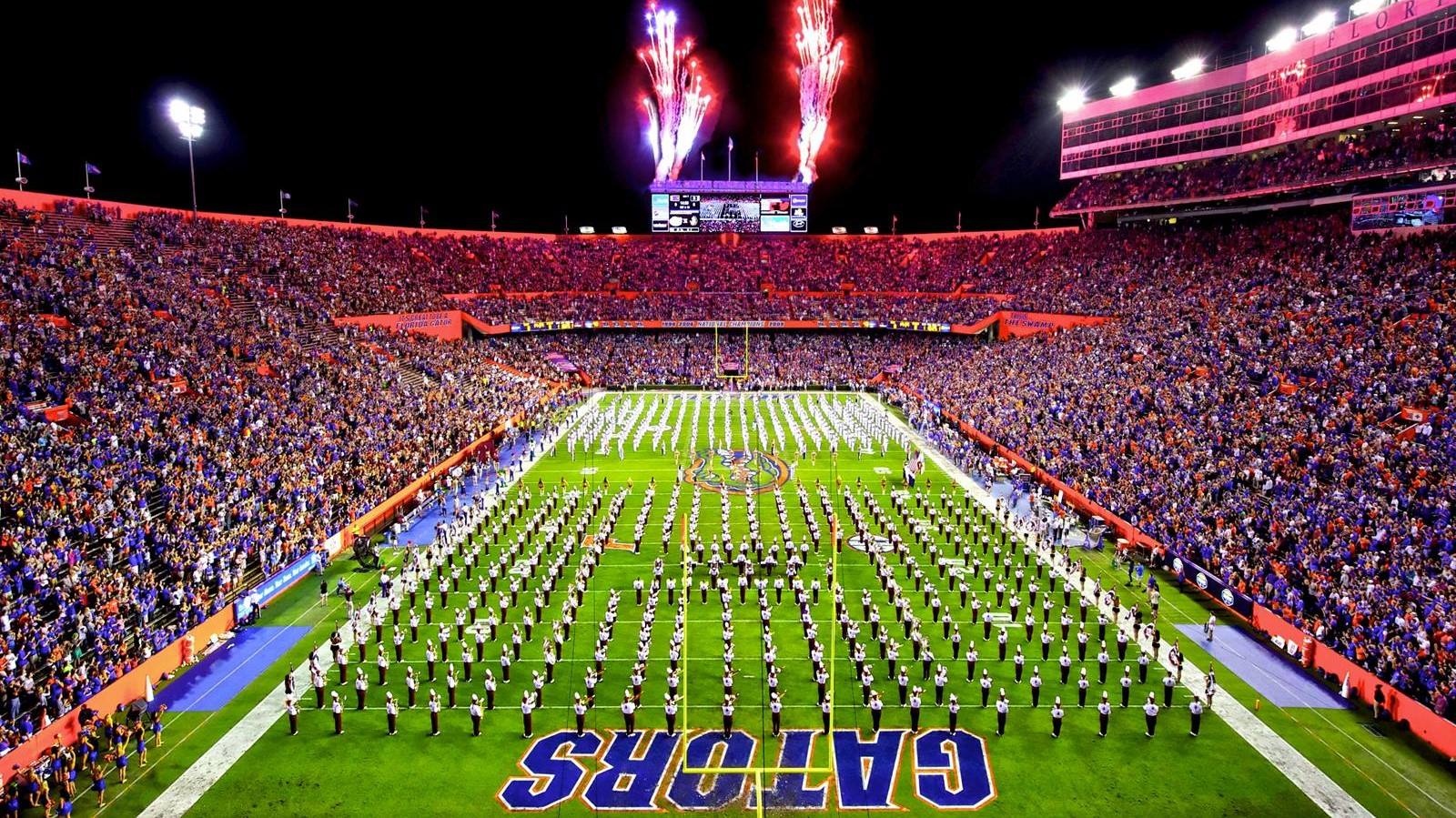 The stadium is located on the northern edge of the University of Florida campus, which is near the center of Gainesville. The stadium and its approach are bordered by West University Avenue on the north side, Gale Lemerand Drive on the west, and Stadium Road on the south. East of the stadium is the University of Florida Campus Historic District, which is the oldest portion of the campus. The east also includes the Murphree Area student residence complex, the Florida Gymnasium, and Ustler Hall. Just west of the stadium across Gale Lemerand Drive is the Stephen C. O’Connell Center. The center is the home arena for the Florida Gators men’s basketball, women’s basketball, gymnastics, volleyball, and swimming, and diving teams.

The facility was simply “Florida Field” from 1930 until 1989. In 1989, the university renamed the stadium in honor of citrus magnate Ben Hill Griffin, Jr. He was an alumnus and major benefactor of the university and its sports programs. However, the playing surface remained “Florida Field”.

It was only on September 3, 2016, that the playing surface was renamed. The new name was in honor of former Florida quarterback and head coach Steve Spurrier. “Coach Spurrier did more than win a Heisman Trophy, a national championship, and a bunch of games. Coach Spurrier changed the culture of Florida Athletics”, UF athletic director Jeremy Foley explained. As a result, the facility’s official name became “Steve Spurrier-Florida Field at Ben Hill Griffin Stadium”.

The facility may be best known as simply “The Swamp”. It may sound weird to some but the explanation make sense as a swamp is where alligators live. The nickname was coined by Spurrier in 1992. In Spurrier’s exact words, “A swamp is where Gators live. We feel comfortable there, but we hope our opponents feel tentative. A swamp is hot and sticky and can be dangerous. We feel like it’s an appropriate nickname for our stadium.” Both the nickname and the tagline “only Gators get out alive” was added later by UF’s sports marketing department. As expected, these phrases quickly became popular and have been commonly used ever since.

Construction began on April 16, 1930. The university immediately faced serious engineering and geotechnical obstacles related to natural groundwater and drainage. The stadium was built in a shallow canyon. Also, the ground of the lower thirty-two rows of the east, west, and north stands below the level of the surrounding land. When excavation reached the water table, water began to pour into the construction site from the north end. It was so bad that it bogged men, mules, and mule-drawn equipment in the resulting mud. The drainage challenge was resolved by the installation of massive underground culverts leading to Graham Pond. After resolving the issues, the construction team completed Florida Field in time for the November 8, 1930 homecoming game against Alabama. Florida Field was rededicated in 1934 to the memory of Florida servicemen who died in World War I. A plaque was placed on the outside wall behind the old north end zone as a memorial.

The original stadium which is the lower half of the current facility—seated 21,769. Initially, the stadium was expanded in 1949–1950 with the addition of 11,200 permanent seats to the west stands, which, together with temporary bleachers, almost doubled the capacity to over 40,000. Additionally, lights were also installed at the time, and the 1950 season kicked off with Florida Field’s first night game. Florida won with a score of 7-3 over The Citadel.

Again, in 1965–1966, 10,000 more permanent seats were added bringing the capacity to over 60,000. Construction of the double-deck south endzone in 1982 and the 1991 addition of the “Sunshine Seats” upper deck to the north endzone raised capacity to over 80,000. The 2003 project greatly expanded club seating and added many luxury boxes. It grew the Swamp to become the largest football stadium in the state of Florida and the second largest sports facility overall. The official seating capacity is 88,548, although the actual attendance regularly exceeds 90,000 as mentioned above.

Prior to the 2008 season, the Heavener Football Complex opened on the southwest corner of the Ben Hill Griffin Stadium. The $28 million addition was funded entirely with private donations. The Heavener Football Complex was meant to be the “front door” of the football program and houses a museum highlighting Florida Football history along with offices, meeting space, a new weight room, and other facilities.

After the 2011 season, an extensive renovation of the 1950s-era concourse under the west stands was done. The renovation was to improve restrooms, lighting, concessions, and crowd circulation patterns and added flat-screen displays for fan viewing.

In September 2016, the school’s University Athletic Association Board proposed a $100 million facilities upgrade to be completed prior to the 2019 season. The upgrade included a $60 million stand-alone football facility for players. The stand-alone facility would include an updated locker room, 3-D hologram training environment, strength and conditioning center, hydrotherapy space, team meeting rooms, coaching offices, and nutrition bar. When the new facility is completed, some of the redundant space in Ben Hill Griffin Stadium will be repurposed for other uses.

For more information on the Ben Hill Griffin Stadium, please see the specific pages below.